Is Sam Bankman-Fried losing the plot? After standing down as CEO of bankrupt crypto exchange FTX, Sam Bankman-Fried appears to be very unclear as to what actually happened to his once great empire.

Amid the carnage of his collapsing empire Sam Bankman did the done thing and resigned as CEO of FTX. Since then, he has put out a number of tweets on Twitter, saying that he would be posting some information on the situation, but tweets he has made since seem more than a little erratic.

5) I’m piecing together all of the details, but I was shocked to see things unravel the way they did earlier this week.

I will, soon, write up a more complete post on the play by play, but I want to make sure that I get it right when I do.

On November 11 Bankman-Fried tweeted out that he “was shocked to see things unravel the way they did”, but said that he would “write up a more complete post on the play by play”, but also said that he wanted “to get it right” when he did.

He posted on the same day about filing Chapter 11 bankruptcy for FTX, FTX US, and Alameda, and also said that he would give clarity on user recovery “ASAP”.

Things went quiet on the SBF twitter account after that for a while until today, when a series of fairly erratic posts began to arrive. The first said that he would “get to what happened” but that he wanted to “talk about where we are today”.

This was followed by a fairly bizarre tweet in which he said:

“[NOT LEGAL ADVICE. NOT FINANCIAL ADVICE. THIS IS ALL AS I REMEMBER IT, BUT MY MEMORY MIGHT BE FAULTY IN PARTS.]”

This was then followed by an equally bizarre set of tweets in a thread that began “What”, and then spelled out “HAPPENED”. 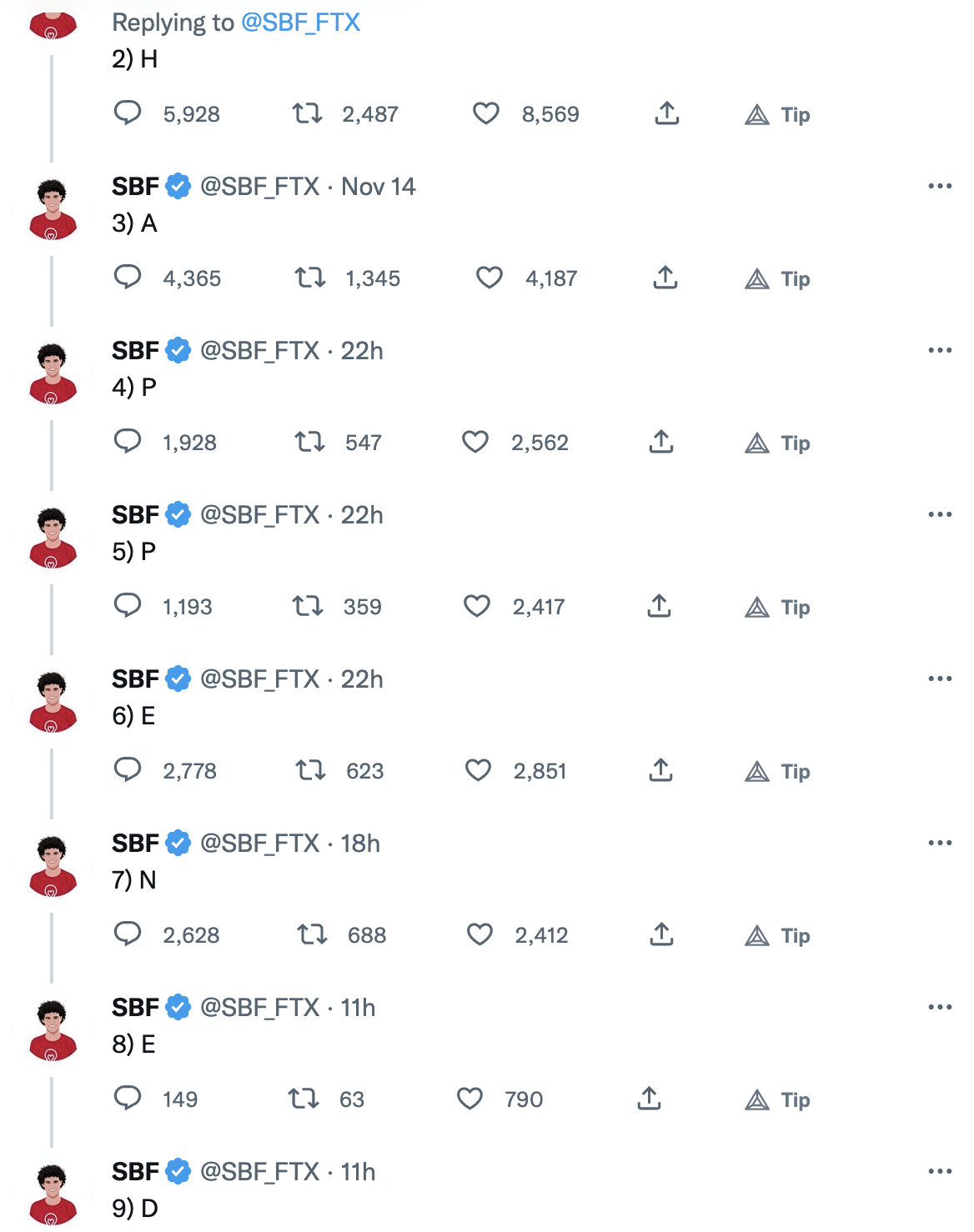 This can’t be particularly encouraging for any investors with tokens locked up on either of the FTX exchanges, and does absolutely nothing towards giving any clarity whatsoever.

Most of the replies to the last tweet were fairly derogatory and it might be wondered what on earth Mr Bankman-Fried is up to. He could arguably be in the most awful predicament right now, but tweeting this kind of nonsense is not going to help.

Surely lawyers would have been obtained, and it would be extremely likely that SBF could have been told to say nothing. The Twitter community may await the next series of tweets with keen expectation.