The intersection of gaming and finance in an environment driven by use of blockchain, non-fungible tokens (NFTs) and smart contracts is often called as GameFi.

It is often cited at the crossroads of decentralized finance (DeFi) and play-to-earn (P2E) blockchain gaming, creating a self-serving ecosystem that goes beyond just gaming and altering the control from gaming studios to players.

Another interesting finding of the survey was that more than half (53%) of respondents stated that they would happily work in virtual game worlds if they were able to earn digital currency from their labour.

Axie Infinity – a blockchain-based online video game which uses non-fungible tokens to collect monsters, or ‘Axies’, to compete against other players – has emerged as a big source of income in Philippines and globally professional gamers as well as digital content creators have been known to earn quite a salary given the scarcity of this skill set.

In traditional gaming environments, usually, players do not have the ability to own the in-game assets. With GameFi, however, tokens related to blockchain based games are blurring the boundary between in-game resources and real-world assets.

In such a gaming environment, users can acquire NFTs or crypto assets for participating and accumulating resources while playing the game, be it in-game currency or in-game assets. These, like any other digital asset, can then be stored in a digital asset wallet or traded in a secondary market.

What are GameFi tokens used for?

Within the gaming world, game finance or GameFi, is giving rise to NFT marketplaces for selling game-in assets such as hard to obtain in-game weapons and props with real money or for swapping them with another player giving propriety and proof of ownership to the game wins.

These weapons can also be leased and rented to other players for a fee and the objects won in one game can be incorporated into other games.

Outside the gaming world, GameFi NFTs can be used as surety for DeFi lending protocols and are permissible for staking, liquidity mining and yield farming.

An increasing number of NFT games are establishing an on-chain metaverse by selling virtual lands as NFTs and are successfully integrated with cryptocurrencies, thus giving real world interoperability for the value of their time spent in-game.

Depending upon its trajectory, GameFi tokens may be used for ownership, speculative trading or may even pave the way for more decentralized metaverse which may not be owned by one large corporation.

Below is a snapshot of the GameFi ecosystem. 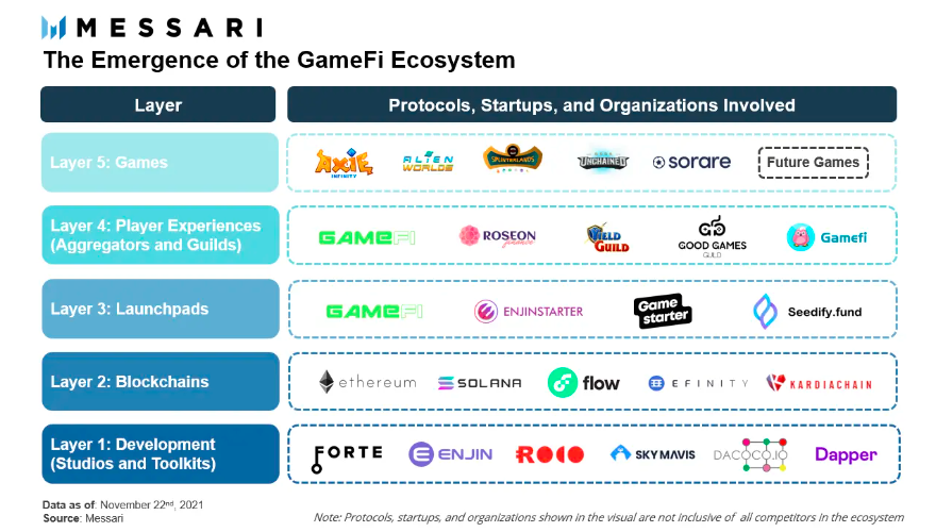 The emergence of the GameFi ecosystem. Image: Messari

How are GameFi initiatives funded?

Most of these consist of various token allocation rounds made up of public and private funding with adequate provision for marketing, gaming incentives and ecosystem development.

Another mechanism for raising funds for blockchain games is initial gaming offering (IGO), which gives gamers timely access to games while helping developers raise more funds for the gaming project.

Once the games are functional, GameFi projects create their own tokens and gaming rules around them, either through a utility or a governance token which also needs to be earned creating revenue model for the GameFi.

GameFi can be based on one token and the same token may be used to purchase gaming avatars through their utility function as well as distribute rewards to players through their governance function, which gives token owners the right to propose and vote on future improvements, game policies etc.

Some games may have separate tokens for in-app purchases and reward distribution, while some may also operate a three-token economy with another token for incentives.

Since most of these games operate on Ethereum blockchain, a gamer needs to put in ether or convert fiat money to the cryptocurrency to participate in the game. Ethereum scalability limitations leads to many GameFi initiatives creating their own separate sidechains.

Additionally, fees collected in these games may land in decentralized autonomous organization (DAO) treasuries and be transmitted to DeFi strategies.

Currently, there are no specific regulations around GameFi as there is ambiguity around who should regulate GameFi – primarily due to its unique features, mode of business and overlap with existing regulatory frameworks.

Here are the key regulatory concerns around GameFi:

The nature of GameFi tokens

As per the proposed draft, any token invested with “an expectation of profit” is likely to be classified as a security so would all the projects that stimulate the liquidity pools which will impact the DeFi ecosystem as well as GameFi projects.

This is because if a GameFi token is used, for example, to buy special access rights in a blockchain-based game with the intention of later realizing income out of it or profiting from it then it may likely be classified as a security and may attract the proposed regulations.

Marketing and promotion of GameFi

Similarly in Korea, the Article 32 (7) of Korea’s Gaming Industry Promotion Act clearly prohibits making a business of converting gaming products into money or intermediating such conversion or repurchase of tangible and intangible results which indirectly limits the distribution and growth of play-to-earn games in the country.

Further, Article 28 of the same regulations considers any promotion speculation by offering free gifts and speculative acts by making use of game products also illegal.

Overlap with regulations around gambling

Some jurisdictions in the US prohibit gambling, including raffles which are conducted quite frequently by players in the GameFi ecosystem.

GameFi may also face restrictions due to its reliance on virtual currency businesses such as crypto wallets, exchange, and trading of tokens which may themselves be regulated or banned.

On the other hand, many countries have introduced tax on transfer of virtual digital assets. Hence the GameFi participants may be required to pay taxes when they make in-app purchases, are rewarded in-game tokens or when they convert/transfer their tokens.

The future of GameFi?

While there has been a lot of interest in GameFi till last year, the crypto winter and many other factors appears to have slowed its growth.

Overall, there are certain shortcomings of traditional gaming that blockchain technology is perfectly solving.