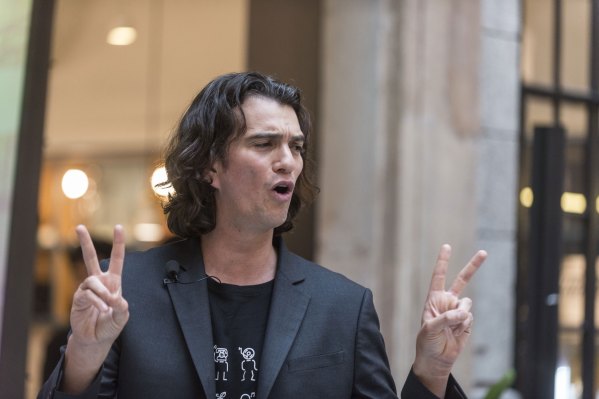 In a classic “pivot to crypto to reinvent yourself” moment, controversial WeWork founder Adam Neumann recently launched a startup, Flowcarbon, to sell tokenized carbon credits on the blockchain.

Venture capitalists just can’t seem to get enough of Neumann and his spouse/co-founder, Rebekah, who started the company alongside its CEO Dana Gibber and two others, Caroline Klatt and Ilan Stern. Now, Flowcarbon says it has raised $70 million in funding led by Andreessen Horowitz’s crypto division (a16z crypto) through a combination of traditional VC equity and a token sale.

General Catalyst, Samsung Next, 166 2nd, Sam and Ashley Levinson, RSE Ventures and Allegory Labs participated alongside a16z in the venture round, the company said, with Fifth Wall, Box Group and the Celo Foundation taking part in the token sale.

Flowcarbon’s protocol helps projects sell tokenized carbon credits to companies looking to reduce their carbon footprint. The credits can then be traded on crypto exchanges, the company says.

Why put these credits on-chain, though? Proponents, including Gibber, say doing so allows projects that provide these credits to more easily raise capital and boosts transparency for buyers.

Of the total funds raised in this round, $32 million came from venture capital firms and $38 million from the sale of Flowcarbon’s Goddess Nature Token (GNT), a crypto token on the Celo blockchain backed by carbon credits, Reuters reported. GNT’s underlying carbon credits are pre-certified by industry groups including Verra, Gold Standard, Climate Action Reserve and the American Carbon Registry and are then sold in bundles to companies, according to Reuters.

Gibber told Reuters that carbon credit providers pay a 2% tokenization fee to Flowcarbon to sell their credits on-chain, lower than the cost they’d incur when selling these credits through traditional channels, which can be up to 30% of the project value.

The credit can also be isolated from the bundle and delivered physically to a token holder if that holder wants to sell it off-chain, according to Gibber.

The company is playing in a crowded space, as lots of startups have hopped on board with crypto’s regenerative finance (ReFi) movement, which seeks to leverage blockchain technology to solve environmental issues. Projects like Toucan, Regen, Moss and KlimaDAO are all working on crypto-based carbon credit solutions.

A private sale of Flowcarbon’s GNT token ends in two days, and the company is currently allowing people to pre-register for an upcoming public sale of GNT, according to its website.

Subscribe to TechCrunch’s crypto newsletter “Chain Reaction” for news, funding updates and hot takes on the wild world of web3 — and take a listen to our companion podcast!