It is difficult, if not impossible, to bring transparency into cryptocurrencies by way of indices. It is even more difficult for investors to truly understand the risks which come with investing in an index of cryptocurrencies

Cryptocurrencies have been in vogue lately. While proponents are ‘holding on for dear life’ through the downturn, naysayers proclaim this to be the beginning of the end. The regulators do not know any better. On the one hand, China, Japan, Canada, and the United Kingdom have banned Binance (the largest cryptocurrency exchange), and on the other, we have El Salvador approving Bitcoin as legal tender. Believe it or not, we even have indices and derivatives on cryptocurrency now.

The S&P Dow Jones recently became the first major index provider to launch a family of cryptocurrency indices. In the words of Peter Roffman, their innovation head, “We look forward to further expanding our new family of Digital Market Indices and bringing much needed transparency to this exciting market”. This sounds like a noble endeavour. But, a cryptocurrency index is an oxymoron.

How would one bring transparency to a market which, in its current state, is inherently opaque at multiple levels? 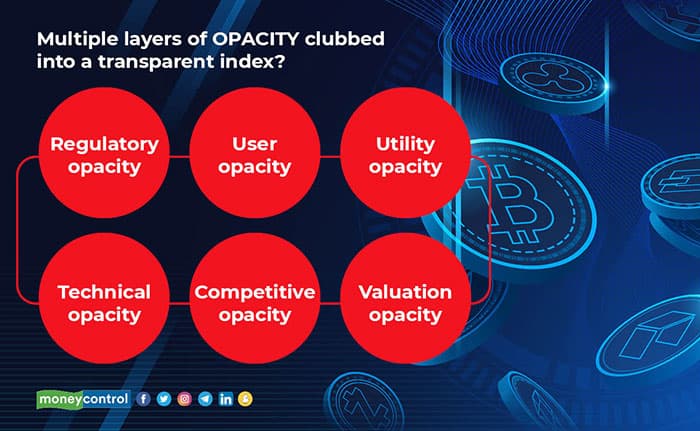 Let’s start with the user’s perspective. When a user sends a digital currency to another user, the sender and receiver details are anonymous. Nobody in the world — no regulator, no intermediary — knows the details. You could be sending the money to a social service organisation or a terrorist group, and no one would know. One could argue that this is by design. But, this lack of intermediary and/or regulator is what makes holding cryptocurrencies extremely fragile.

You could forget your password and lose your life-savings, as what happened to San Francisco-based programmer Stefan Thomas who forgot the password to his Bitcoin wallet containing ~$240 million. You could make a wrong transaction, and forget about getting your money back. Cryptocurrency exchanges have lately been plagued by thefts and hacks, but there’s no means of redress. There’s no fall back option, no roll-back feature, no redress mechanism, and no recourse — and this is supposed to be a store of value!

Let’s talk about regulations. What happens when businesses follow in the footsteps of Tesla and stop accepting cryptocurrency as a means of payment for their products? What happens if other countries do not follow El Salvador in approving Bitcoin or other such currencies as legal tender? What happens when other countries take a leaf from China’s book and work towards their own digital currency? Nothing like a cryptocurrency with all the advantages of fast processing and accurate authentication, and none of the regulatory uncertainty, right?

Large uncertainties plague even the technical aspects of cryptocurrencies. We know that the supply of Bitcoins is limited to a maximum of 21 million by virtue of its source code. We also know that miners get paid in Bitcoins for authenticating the blockchain. What happens when the supply of 21 million runs out? What happens as the reward for mining diminishes progressively? Would monetary consideration suffice as an incentive for miners to keep mining and verifying transactions? Or will the source-code be modified to remove the cap on supply? If the source code is modified, what would happen to its scarcity-driven status as a store of value?

Let’s talk about the competitive landscape. There are thousands of cryptocurrencies, and many are coming up as we speak. Will your favourite crypto evolve and adapt, or stick to its core philosophy and risk fading into obscurity?

Furthermore, not all of these ‘cryptocurrencies’ are aiming to be currencies at all. They serve widely different purposes — some claim to be stores of value, some are gunning to be commodities, while others are more about technology. This creates an additional layer of complexity when you try to club them under a single index, or create indices bifurcated simply by market-capitalisation with no regard to their utility (or the lack of it).

If you invest in a cryptocurrency index fund (such as the one provided by Bitwise Asset Management which happens to be an ‘index fund’ with 75 percent concentration in Bitcoin), what are you essentially investing in? Which asset-class’ risks are you assuming?

Finally, let’s talk about valuations. Standing today, what is the source of value for Bitcoin? Some believe it to be a store of value because of its scarcity, not dissimilar to gold. But gold is truly scarce, while Bitcoin is scarce by virtue of its source code which is not immutable. Furthermore, how can anything be a store of value when it is not a globally accepted medium of exchange yet? Let’s consider possibilities: if Bitcoin were to replace 15 percent of all money and stores of value, it would be worth roughly $500,000 apiece (under several assumptions). However, the quickly evolving regulatory and competitive landscape could take any shape. So, any trading/investing in Bitcoin or other digital currencies is driven largely by speculation. Take, for instance, Dogecoin, a coin launched as a joke which now commands a market-capitalisation of millions of dollars — all thanks to speculative, whimsical trading.

These are the reasons why it is difficult, if not impossible, to bring transparency into cryptocurrencies by way of indices. It is even more difficult for investors to truly understand the risks which come with investing in an index of cryptocurrencies.

Think of it as the Internet bubble when IT companies thronged the markets like never before. Only a few of them made it big, while the rest fell into oblivion. When you buy into an index of such companies, you are basically acting as a venture capitalist, and you should be okay with a 1:10 success ratio.

If this is something the investor has fully understood and accepted, only then does investing in a cryptocurrency index make sense.

Views are personal and do not represent the stand of this publication.