Blockchain scalability and proposed solutions have been at the forefront of social media chatter for half a decade. For example, the Israeli software company Starkware and Ethereum co-founder Vitalik Buterin recently talked about the idea of “Layer 3” as one of these solutions. Starkware says multiple Layer 3’s will ride on top of Layer 2, and “fractal layering” solutions can be built on top of Layer 3’s.

The Opside project recently released their plans for a three-layer architecture. This will allow developers to create blockchain applications that have access to faster speeds and cheaper transactions. This is made possible by the Opside chain, which is dubbed a Layer 2 solution because it sits on top of  multiple Layer 1 platforms (Like Ethereum, Binance Chain, Bitcoin, etc) and uses them as a settlement layer. The “Layer 3” functionality takes this even further, allowing for developers to spin up a set of “rollups as a service”. This architecture gives Layer 2 a more comprehensive range of assets from bridges and the ability to grow indefinitely from rollups.

In order to handle the contract calls between multiple chains, Opside developed a protocol to handle all the contract calls. Also in development is DAO voting that allows the Opside community to vote on which public chains to use for Layer 1 settlement.

Layer 2 solutions depend on the decentralization of their Layer 1 counterpart to provide faster transaction times and lower gas fees. It seems to be acceptable to most blockchain communities to have a centralized layer on top of their platform so long as every transaction gets settled at the Layer 1 level. Efficiency is achieved by “bundling” a set of transactions and settling later. Layer 3 amplifies this model, allowing even greater cost efficiency while maintaining the speed of the Layer 2 network.

Layer 3 holds the potential to offer such low costs, that projects built even on Layer 2 networks won’t have to deploy their own Layer 1’s to lower the settlement fees. These applications, such as Axie and dYdX Decentralized Exchange had to do this, simply because their model depended on the fastest transaction times and lowest fees. If deployed on a Layer 3 rollup, it could prevent the need for yet another blockchain.

Further, Opside will establish connections with various public chains of the asset layer through the trustless ZK-Bridge. Compared with other bridge schemes, the ZK-Rollup scheme involves more ZK-proof systems. In the cross-chain operation, it is necessary to generate ZK Proofs to ensure the correctness of the execution process in addition to a general “execution.” The deposit and withdrawal operations of ZK-Bridge are “solidified” as a circuit, and the circuit logic is completely exposed.

Native rollup is somewhat similar to the architecture of Polkadot. Once a rollup registers a slot, the rollup becomes a native rollup. In contrast, the Polkadot architecture has the disadvantage that the consensus of the parachain depends on the assigned set of validators. There is a correlation between security and the number of validators. If a few validators went offline, the parachains whose validator groups are too small to validate a block will skip those blocks, or even stop until the situation is resolved. Opside does not have this problem because layer 2 collects data from all native rollups in layer 3 and verifies all zk proofs. Opside Chain is more secure and decentralized with all rollups on it as a tighter whole, sharing the same consensus layer. 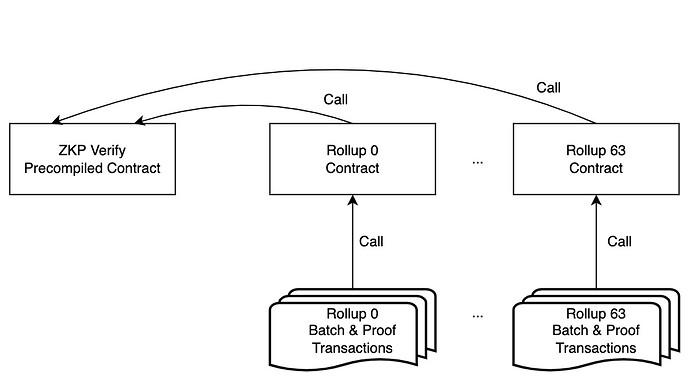 Layer 2 and layer 3 of the Opside architecture share a consensus mechanism with a hybrid of PoS and PoW.

More importantly, in Opside, after completing the registration of slots, native rollups share a world state tree with each other and the same global message queue. Therefore, native cross-rollup interoperability is possible in Opside. Imagine you want to lend USDC to a loan contract in Rollup A and then go to DEX in Rollup B to trade to buy BTC. On Opside, you no longer need to withdraw assets from Rollup A to L1 and then recharge them from L1 to Rollup B. Instead, you can call the contract method of Rollup B directly in Rollup A. This will make the whole process much faster, cheaper and safer.

In the third layer, Opside supports developers to deploy their own rollups, while Opside also provides a decentralized rollup solution based on RaaS mentioned above. Developers can freely choose which one to adopt. This solution is trustless and permissionless. Anyone can submit L2 batches and proofs to L1.

To summarize, the “base layer <- opside <- rollup" architecture of Opside has the advantage of asset variety and infinite scalability. It could be another choice to solve the scalability problems of web3 applications. Compared to expensive rollup-based layer 2s, it is more suitable for high-throughput applications like games.